After spending one night in Bangkok we decided to go to smaller city in the North – Chiang Mai. So we took our backpacks and headed into train station to get the tickets. Before entering to train station few Thai women came to us saying that tickets for trains are sold out and we have to go to another place to buy them just near the station. It was another scam. Womens were just trying to make some money from us. We thought to get tickets to night train with sleeping beds which leaves Bangkok around 3 pm but apparently early trains were really full so we got tickets only for evening train which departs around 6 pm and paid 700 baht per person. And ofcourse as every transport is late in Thailand we left only around 7 pm. Just later we found out about 12go.asia  – website for transportation booking in asian countries.

Before going to train we got some sandwiches and snacks from 7-11 store. It was good decision because food in train was more expensive. Aproximately after 30 minutes after train started to move the young Thai man came to us and said “Hello, I want to make a bed”. And just in couple minutes our seats transformed into 2 metre lenght beds. Thats where the sleeping time came. We tried to get to sleep but the was stopping every 30 – 60 minutes and moving as a small boat during biggest storm. I believe we slept no longer than one hour. Maybe you just have to get used to it.  I heard some people even snoring somewhere in the train.

After 13 hours night trip from Bangkok to Chiang Mai we finally arrived. First thing we saw was 20-30 taxi drivers trying to catch some tourists for a drive. We fastly got through them and turned on our navigation to reach the hostel we booked for the first night. And just after few minutes walk from Chiang Mai train station we smelled perfect breakfast smell. There was an old lady cooking eggs and pork. We stepped in to ask the price and it was only 25 baht for huge portion of rice with omlet or with pork and lots of vegies on the side. We took it and it was such a good first impression of street food in Chiang Mai that we couldn’t be more happy after such a long trip in night train. After getting our tummies full we headed to the city center.

We reached our hostel. It was very strange – we got into place which had sign of our hostel name but we got ourselves into tailor shop. The owner was speaking in english quite well and told us that we have to wait for our room until 5 pm but we can drop our backpacks here if we want to go somewhere until we wait. He asked to pay for a room now – it was 300 baht + 300 baht key deposit in case of loss. We paid and went somewhere. We walked through the city, stopped in few places to get cold drinks and just wandered around until 5 pm. When we finally got our room, we straight went to sleep and next day in the morning checked few places where to stay and found Mapping hostel.  We stayed here for 2 nights and paid 150 baht per night for double bed bungalow. The site is 15 – 20 minutes walk from city center. We enjoyed place a lot – it is very friendly enviroment with happy people, english speaking, helpful owner and lots of place to relax. 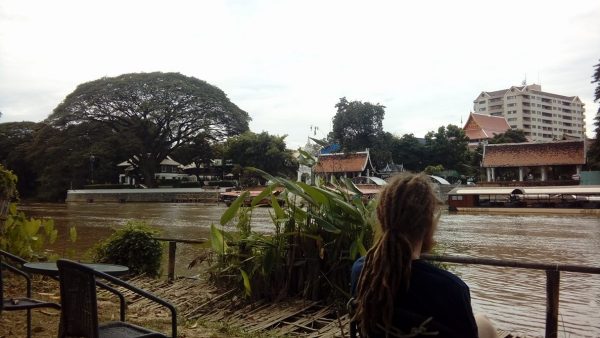 Mapping hostel is located near the river

During our stay we explored city, temples and nearby Doi Suthep park. City centre is not very big and has a lot of european and american faces wandering around what makes this city to look very touristic. Night life is starting around 6 pm when all pubs and Chiang Mai night market opens. We found Bus Bar with every night live music where local band plays known songs covers and does it quite good. Here we met few fellow travelers and talked each others to get to Doi Suthep park tommorow. 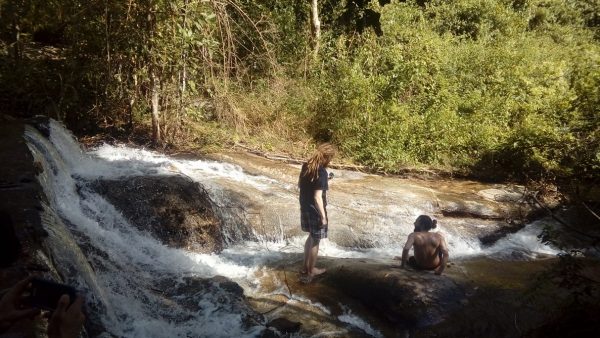 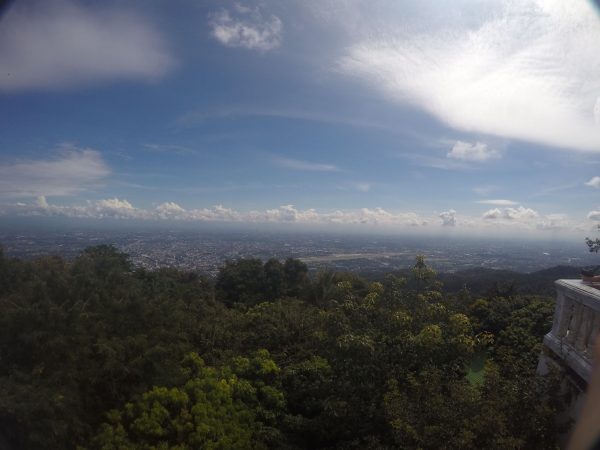 We met in the pigeons square where people comes to take photos while feeding pigeons. Sound stupid. But people are doing that and locals are selling seeds to tourists to feed the birds. When all of us gathered in the square (6 persons in total), cought tuk tuk and got a ride to Chiang Mai zoo for 20 baht per person where we started climbing the mountain. We could take whole ride up the mountain but  decided to walk on the main road. On the way there were lots of fast lizards few nice view sites and small waterfall hidden on the right side while you go up. We stopped near waterfal to refresh ourselves and in the place there was not even one person. All waterfall was for us. After that we continued walking and decided to hitch a car up. And we did it in few minutes. Pick up truck stopped and all 6 of us got in the back and had nicest hitch hiking experience. So yes – hitch hiking in Thailand is possible. We reached Wat Phrathat Doi Suthep temple which so far was the most touristic place that I saw in Thailand. And first temple that we had to pay to get inside. Temple inside looks amazing and beautiful but the crowds of tourists makes it look a bit cheap. The thing that looked most interesting for me was small kids dressed in traditional Thai clothing shouting something for tourists in Thai language. 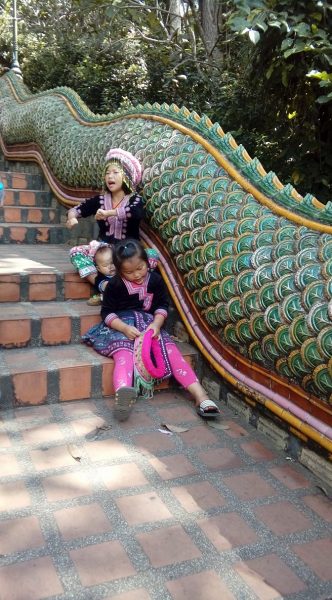 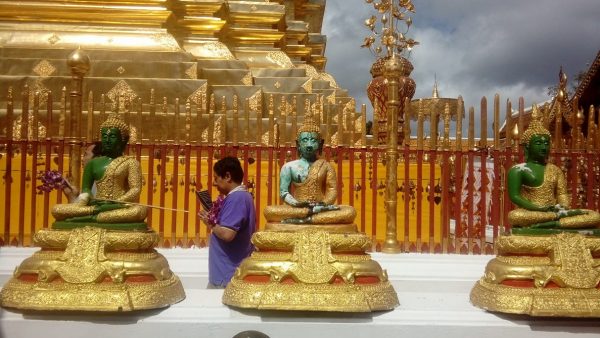 After temple visit we got some food for 50 baht per dish (rice with pork and veggies) and decided to find monks path through the jungle to get down the mountain. We asked locals where to find the path but no one knew. We even tried to ask policemans in police station. No one knew. So again we hitch the car down the mountain and reached Chiang Mai. So transportation cost us only 20 baht per person to visit Doi Suthep. Few weeks later we were thinking how good and cheap was in Chiang Mai..

We came back to our hostel and looked where to go next. Ended by getting ourselves into trap of beautiful pictures of Doi Phu Kha national park. Thats were we headed next about what you can read in upcoming article.