Our trip to Thailand ofcourse started from looking for cheap tickets to Bangkok. We managed to find tickets just for 90$ one way from Copenhagen to Bangkok in 2017 November on MOMONDO. So we took them and what was left is just wait for few months, quit our jobs, sell our stuff and go !

We are Lithuanians Mindaugas and Viktorija who were residing in Iceland so we had to get 60 days visas from Thai embassy in Iceland what was quite easy. We got our visas in 24 hours after filled application. We were asked to have following documents before applying for Thailand visa  :

-Proof of some accommodation (2 nights in hotel or copy of hosts ID with signature, names of invitees and dates of visit + copy of house registration)

And so November came and we took off.. First we reached Copenhagen where we spent 3 nights – walked around the city and visited suburbs. In three nights we :

-Visited free town of Christiania – place with other laws than all Denmark. In this town there are rules that people must respect – no stealing, no violence, no guns, no hard drugs and no running. Everything should be calm and peaceful. Everyone in there looked calm except pot dealers whom didn’t allow us to film them or take pictures. They do not want advertisement like this..

-Visited Copenhagen zoology museum which has really huge collection of everything animals related.

-Did free guided tour which happens everyday. Guide was very informative, funny and fluent in English. It took around 4 hours to walk around city center. Just make sure that you registered online before going to tour. You can do it here www.copenhagenfreewalkingtours.dk

-We went to suburbs with metro to take a walk around lake near Lingby city and we liked it more that Copenhagen city itself.

Just before our 11 hours flight to Bangkok we went to Copenhagen airport. We had a flight with Norwegian airlines which are much more comfortable than Wizzair or Ryanair. We had more room for legs and even our own entertainment system  – touch screen monitor with some games and a lot of tv shows, movies and documentaries. It was very good that we had our headphones to connect to system because if not the flight would have been very long. 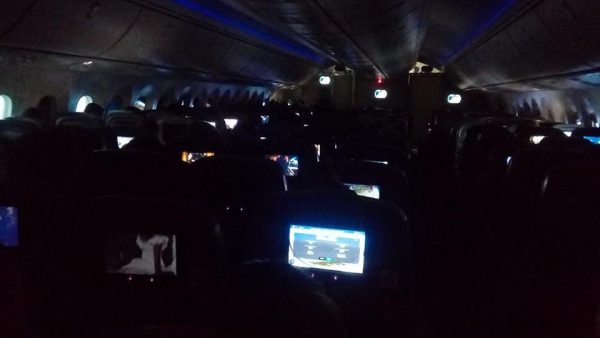 So after 11 hours flight we landed in Bangkok and we felt that it’s so different from what we expected. At first we throw away our jackets into trash bins and went outside airport to see how does the Bangkok look. And as we reached nerbiest street we heard the most common words said in Bangkok for foreigners “Helliou my friend! Where you go? Taxi?”. Taxi driver smilled at us and tried to get us into his taxi by taking conversation to next level speaking about some non related stuff but we were able to get rid of him. Oh, and I forgot to mention heat. We came from countries where normal temperature is +5-10 degrees of celsius and in Bangkok it was +35 degrees of celsius so in few minutes we turned into sweat.

We came back to airport to exchange some euros into Thai bahts. Best rate we found was at Superrich money exchange which was at lowest floor. We exchanged 500 euros and got a bit more than 20 000 baht. We thought that it will be enough for whole month for 2 persons. But… About that later.

Also we bought prepaid travelers sim card for 300 baht in the airport. But it was a mistake. For those 300 baht we got 8 days of free data and 100 baht for calls. We found out that only after 8 days when internet stopped working and we started getting some strange text messages in Thai languege. And at that momment we were in national park which was far away from any shop where we can get our sim cards data working again. After that we did some research and we bought “TrueMove” sim card for 399 baht with internet data for all month.

After some mistakes and first impressions we had to leave Bangkok Suvarnabhumi airport and find the dentist to fix one tooth filling. We have made appointment in Ekkamai dental clinic about week before coming to Thailand. To get there we had to take 2 trains from Suvarnabhumi to Phaya Thai and from Phaya Thai to Ekkamai. We did that in about 1 hour and paid 75 baht per person. Getting into street from Ekkamai station gave us new discovery – traffic. As we are used to slow and not overcrowded traffic what we saw was huge mess. Everyone is going where they need to go – no rules, no traffic lights, nothing. We had to cross the street and it was scary, very scary, but somehow we did that. We reached the clinic safe and not hit by crazy drivers. Ekkamai dental clinic looked clean. We explained to receptionist that we have an appointment. She told us to sit down, fill some form and wait. After some time doctor came, asked Viktorija to go with her and take of the shoes. They left. To fix the filling took around 30 – 45 minutes and they charged 2700 baht for that. I believe that was the first time we got scammed in Thailand.

After clinic we had to find our cheap room that we booked. We could have gone with the train but we decided to see the city and walk 6 kilometres during hottest daytime. It was good and bad decision. Good because we saw a lot during the walk, we saw people working on streets, living in dumps, living in luxury, sleeping on ground and much more that is hard to describe. Bad because it was way too hot to walk during midday. We were stopping to cool of almost in every store that we found on the way.

We reached our destination Miggy guesthouse and we were very surprised when we walked into small street. After long walk through the city we entered small jungle. The street was so welcoming – plants everywhere, pet birds singing and everyone smiling. For 350 baht we got big room with fan and hot water. We were allowed to use filtered hot water to make our own coffe at the kitchen. Also in the morning we found some free snacks for guest near reception. Owner suggested us that neighbor is making tasty food so we decided to try and we got very delicious meals for 50 baht per person from local kitchen.

Next day we decided to leave big town and headed to the train station to catch overnight train to Chiang Mai. On the way we visited Lumpini park with huge monitor lizards, turtles and birds, few temples and China town with huge variety of street food. 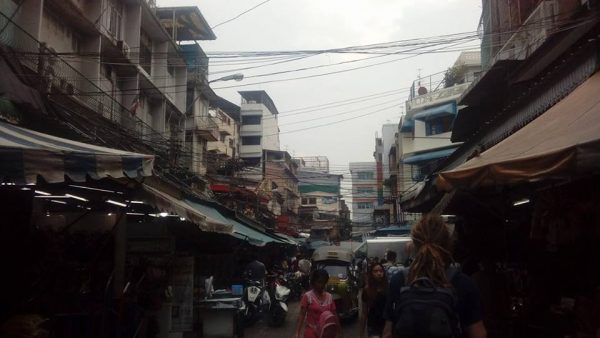 All in all one night in big Bangkok city was enough for us so we flew away for smaller place in North about what you will be able to read in upcoming post.


How we got to Thailand – first impressions and what to expect